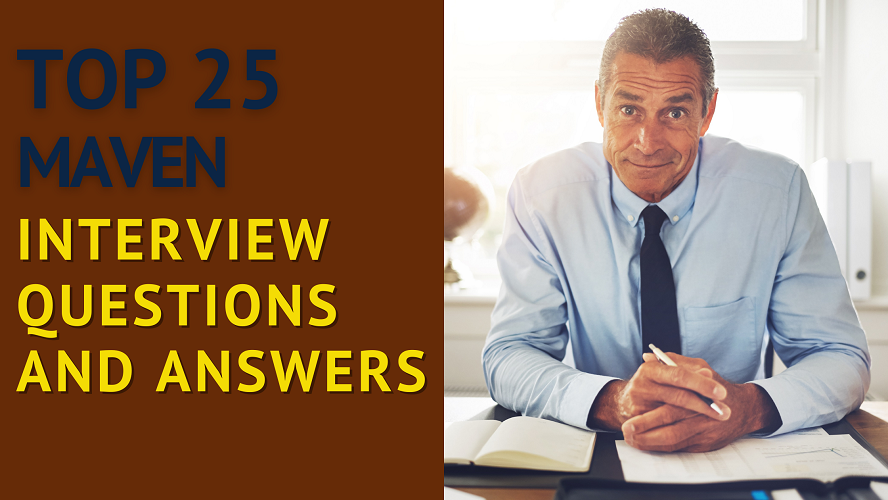 Are you seeking a career after completing your BTech? Having some web programming knowledge, such as Angular JS, HTML5, CSS3, JSP, and CGI/Perl/Shell scripting, will help you be selected for positions.

When attending a Maven job interview, prepare for the topics below. HTML/XHTML, JavaScript, jQuery, AJAX, and CSS are all beneficial abilities to have.

For Java projects, a Maven is an automation tool. Maven is a software development framework that outlines how software is created and developed. Other projects may also be managed using it. Maven job interview questions and answers are created for job seekers to use as a guide for giving their best interview performance. To succeed in your job hunt, look at these Jobs Interview Questions pages.

The most commonly asked Maven questions for freshers and advanced candidates are covered in this tutorial. Candidates should prepare to answer the most frequently requested interview questions on Maven, just like they should for any other interview. This page will undoubtedly assist you in your interview preparation.

Maven is a software application for project management and understanding. Maven is a build lifecycle framework for Java developers. Because Maven employs a uniform directory architecture and a preset build lifecycle, the development team can simply automate the project’s build infrastructure in minutes.

2. Describe How Ant And Maven Vary From One Another.

3. When Should Maven Be Used?

In the following scenarios, one may use the Maven Build Tool:

Maven’s main ideas are as follows:

Maven is a three-step process.

6. What Elements Are Used For Creating A Pom.Xml File?

To create a pom.xml file, you’ll need the following items:

The version element contains the project’s version number. It’s a good idea to indicate the versions of your project if it’s been published in more than one.

File Elements in the Pom.xml Format

7. What Kinds Of Maven Repositories Are There? Explain.

8. How Should Jar Files In The Local Repository Be Installed?

9. What Do The Terms Clean, Default, And Site Signify In Maven?

The three build life cycles that are built-in are as follows:

10. How Does The Default Life Cycle Work?

The default lifespan is divided into four phases:

Plugins for Maven are used for a variety of purposes, including:

There are two types of Maven plugins:

12. “Maven Prefers Convention To Configuration” – Why Is This The Case?

• Maven prioritizes convention over configuration since developers just need to create a Maven project and follow convention. A computer program creates the remainder of the structure. Build processes must be developed manually when it comes to configuration.

13. What Is Maven’s Inheritance Order?

Maven’s inheritance hierarchy is as follows:

A snapshot is a project version that displays the most recent development copy of the project currently being worked on. Maven downloads a SNAPSHOT of the project for each build from the remote repository.

Consequently, if Maven detects a newer SNAPSHOT of the project in the local repository, it downloads and updates the project’s older.jar file.

15. What Are The Locations Where Maven Dependencies Are Stored?

Maven build profiles may be classified as follows:

The following are some of the ways that Maven build profiles may be enabled or triggered:

17. How Would You Refer To A Pom.Xml Property?

The property name uses the names of the XML components that define the value, with “pom” recognized as a synonym for the project (root) element to refer to a property specified in your pom.xml.

18. How Do I Use Maven To Produce Javadocs?

Maven generates Javadoc for a project using the maven-Javadoc plugin. This plugin utilizes the JDKbinjavadoce.exe program to generate Javadocs internally. When the project is deployed using the mvn install command, the javadocs for the project are created.

Every Maven plain Old Java Object (MOJO) is an executable objective, and a plugin handles the distribution of these MOJOs. MOJO enables Maven to introduce new features. A single unit of the job in Maven is called a MOJO.

All dependencies linked to the current stage of the construction are included in the dependency scope.

The many types of dependency scopes are listed below:

22. What Do You Mean By A Maven Archetype? How Will You Create A New Project Based On An Archetype?

Maven Archetype is a Maven plugin that allows you to build a project structure from scratch. When you start a new project, Maven creates these archetypes: project templates. In a word, Archetype is a toolset for modifying Maven projects.

In the command prompt, run – maven archetype: generate after navigating to the directory where the project is located. This makes it easier to start a new project using an archetype.

Creating a project from an archetype consists of four steps:

A remote repository is usually used to get an archetype. You’re good to go if your Maven setup allows you to access that repository. If the repository isn’t maintained and you want to refer to it directly, you’ll need to include it in your settings.xml file.

23. How Does The Clean Lifecycle Work?

The Maven clean lifecycle removes all temporary files from the output directory, such as produced source files, compiled classes, and prior JAR files.

24. What Are The Different Stages Of The Site’s Lifecycle?

The Maven site lifecycle is in charge of everything related to document generation for your project.

25. Describe The Clean, Surefire, And Antron Plugins, Three Of The Most Widely Utilized.

Maven clean is a plugin that tries to clean up the files and folders created by Maven during the build process, as the name indicates. The plugin deletes the target folder, including all class files, documentation, and JAR files.

During the test step of the build lifecycle, the Surefire Plugin runs an application’s unit tests. It may produce reports in plain text or XML format.

You may use the Antron Plugin to run Ant tasks right from Maven. You may even include your Ant scripts in the POM!

link to 6 Career Resolutions for The Year 2023

At the end of every year, business owners and talent managers assess their performance and plan for the future. For 2023, tendencies are toward planning, not setting goals and expectations. Employees...

Most businesses these days rely on some form of software to help them run more efficiently. But with so many different types of software on the market, it can be challenging to know which ones are...