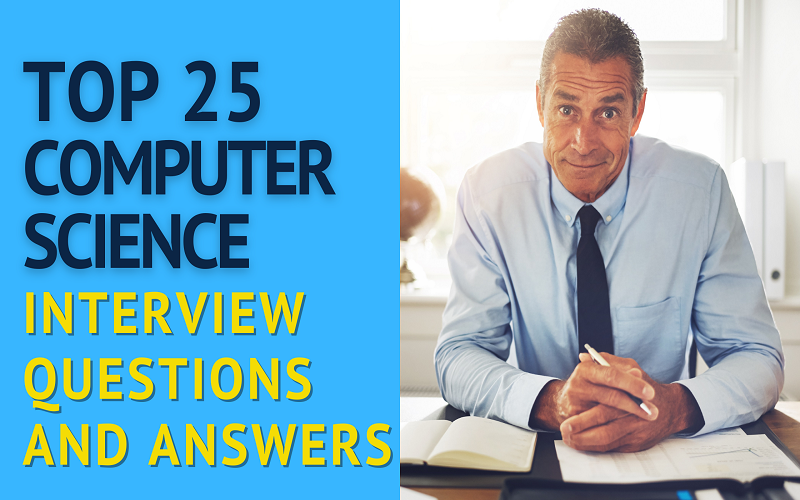 Computer science deals with the study of computers and different computational systems. It is pretty wide, which explains the number of professional fields related to it. In case you are a computer scientist searching for a job or applying for a computer science-related interview, we have something for you.

This article will focus on some questions you should expect in your upcoming computer science interview. We have picked the most common to increase your chances of landing the job. Take note of the following questions as you prepare for your upcoming interview:

1. Can You Define Computer Science?

2. What Are The Skills Required In Computer Science?

Given the technicality and importance of this field to everyday life, computer science requires an array of skills. Every computer science professional should have excellent programming, mathematical, data science, and problem-solving skills. Other Skills include communication, teamwork, critical thinking, and digital marketing skills.

3. Why Did You Choose Computer Science?

I was always intrigued by computers from a young age. I wanted to know how computers function and therefore asked lots of questions. Seeing my interest and enthusiasm, my mother, a computer scientist, occasionally took me to work and let me watch her as she typed long lines of code, which further got me. I, therefore, decided to pursue this field to quest my curiosity. I am glad that I have never regretted my decisions. I have come up with many computer-related solutions owing to my love and passion.

5. Define The Relationship Between A Class And A Superclass

These two are some of the most important and common terms in object-oriented computer programming, brought about by languages such as Java and C++. The class, therefore, defines an object’s characteristics and dictates the type of message the object should respond to and its response. When a given class is derived from another, it is often referred to as a child, extended, or derived class. The super, base, or parent class is the class from which a given subclass is derived.

6. Computer Systems Rely On Processors. Can You Tell Us What They Are?

A processor is one of the most important units in a computer system. A computer cannot execute basic functions without a processor. It is a logical circuit that processes basic instructions on how a computer should work. The processor is widely referred to as the computer’s brain since it empowers the execution of all computer-related functions. There are different types of processors depending on the brand, prowess, and type of systems.

7. Mention The Main Parts Of A Processor And List Some Of The Most Popular Processors You Have Encountered In Computer Systems

A processor has two parts: the arithmetic logic unit, popularly known as ALU, and the control unit, shortened as CU. The Arithmetic Logic Unit is normally charged with performing all mathematical operations while the control unit manages commands and different operations. These two parts enable a processor to communicate to different computer components such as the input and output devices.

Some of the most popular computer processes I have encountered are the Intel family and the AMD Ryzen processors.

8. SDLC Is A Common Term In Computer Science. Define It

There are seven stages of the software development life cycle that ensure high-quality results. They are a requirement, defining, designing, construction, testing, deployment, and maintenance stages.

A programming language offers a computer scientist a means to communicate with computers. It consists of grammar rules used to instruct computer systems to execute different tasks or perform an array of functions. These languages implement algorithms and are widely applied in developing different applications. Even though I am proficient in several programming languages, I love JavaScript, given that it can be used both on the client and server-side. It has helped me come up with lots of dynamic websites and applications.

A constructor is a common term in class-based object programming languages. They are special methods in these classes that are automatically called with the creation of new object classes. As a general rule, constructors share a similar name with the respective classes and act on the data members of the newly created objects. Even though they are similar to instance methods, they lack an explicit return type and have different guidelines for the associated scope modifiers. Constructors cannot also be implicitly inherited.

This is the first thing an object looks for when omitted in a given program. However, programming languages such as Java can automatically create a default constructor.

11. Your CV Says That You Are Experienced In Object-Oriented Programming. Can You Mention The Oops Principles In Java?

It is common knowledge that every object-oriented programming language, such as Java, must align to the OOPs Principles, which is the short form of object-oriented programming system principles. Java, therefore, follows the inheritance, polymorphisms, abstraction, and encapsulation principles, which form the OOPs rules. This is because object programming languages use classes and objects to design programs.

12. Explain All The Oops Principles

Four OOPs Principles guide object-oriented languages, i.e., polymorphism, inheritance, abstraction, and encapsulation. Encapsulation refers to the binding or wrapping of data into one main unit. This mechanism binds both codes and the manipulated data, thereby acting as a protective shield that protects data from unwarranted access by unqualified codes.

Abstraction ensures only functionalities are visible since it hides all internal details. This principle ensures that only the necessary attributes are revealed, shielding users from unnecessary information.

As the name implies, inheritance involves the acquisition of all the properties of a given class by another. The inheriting class is normally known as the child class, while the mother class is the parent class.

The last principle, polymorphism, means different task performance abilities or the ability to process data in many forms.

13. Differentiate An Abstract Class From An Interface

14. In Your Opinion, Which Programming Language Should One First Learn Between C And C++?

C and C++ are some of the most popular programming languages owing to their prowess and uses. Even though both are generally easy to grasp, people are advised to start with C before moving to C++. C is good for system-level programming and comes in handy once someone is familiar with procedural programming. On the other hand, C++ is easier to learn and grasp if one is familiar with OOPs concepts of Java.

The main difference between these two languages is that whereas C is a procedural programming language, C++ is an object-oriented programming language. The latter supports all the OOPs Principles such as abstraction, inheritance, encapsulation, and polymorphism. C language also follows a top-down programming approach, while C++ uses a bottom-up one. The C structure does not have a function declaration present in C++. Lastly, these two languages focus on different things. While the C language mainly focuses on the method or process, C++ has its main focus on data instead of the method or procedure.

Just like humans, computers rely on memory to store and retrieve data and information. There are two types of computer memories: primary and secondary. While the primary memory is the system’s main memory that the CPU can access, the secondary memory is external. It normally exists when external storage devices such as flash disks are used. Even though these two types of memories act differently, they have the same purpose.

18. Define WWW And Mention Its Uses

WWE is a common term that stands for the world wide web. It allows different people and users to access information from the internet. This information system uses uniform resource locators to retrieve documents and several web resources, popularly known as URLs, that are linked by hyperlinks. The webserver publishes the web resources, which are then transferred via the Hypertext Transfer Protocol service, popularly known as HTTP. A user only needs a web browser to access these resources.

The framework is a common term in programming and computer science that refers to a platform or software used to develop applications. Frameworks generally manage hardware, interact with software systems, and process inputs. It is from the framework that software developers build programs to be used in a given platform. Most platforms have predefined classes and functions.

It is also worth noting that frameworks can be built, optimized, and tested by different parties, i.e., programmers, software developers, and engineers, which explains why they are efficient, robust, and versatile. Most applications developed using a framework are usually highly functional.

IDE is the acronym for Integrated Development Environment. The IDE is a GUI-based software program or application loaded with facilities that help computer programmers in their software development venture. IDEs have built automation tools, a source code editor, and a debugger which comes in handy in application building. Developers can also easily use all the programs and libraries. This development environment empowers software teams to build highly functional applications, given that it combines all the tools into one graphical user interface.

Java is one of the simplest, most secure, and most reliable programming languages. This neutral and platform-independent language was introduced in 1995 by Sun Microsystems. It is mostly used in retail, banking, and information technology software development. It also comes in handy for web and desktop application developments.

On the other hand, Python is one of the easiest to learn programming languages. This open-source, widely used language is usually recommended for those interested in learning how to code from scratch. It is mostly used in big data, artificial intelligence, machine learning, and robotics.

22. In Your Opinion, What Do You Think Are The Least Known Programming Languages?

Even though I wouldn’t term them as least known, PHP R and Go Programming Languages do not have enough buzz around them. The PHP programming language is normally used for static and dynamic website creation. This powerful server-side scripting language can write CSS, JavaScript, and HTML codes.

Lastly, the Go Programming language, Golang, helps build reliable, simple, and efficient software. It is the most recent as it was developed in 2007.

Artificial intelligence can be defined as the use of machines to simulate animal and human beings’ intelligence. Commonly known as AI, its impacts are already being felt worldwide. It was introduced to fasten the process of solving the different problems we face daily and come up with better solutions. This is achieved through several smart machines that perform different tasks like humans, just that they are faster and better.

In computer science, machine learning involves learning intelligent agents, which can be described as systems capable of perceiving their environments and acting in a way that brings them closer to achieving a certain goal.

24. Differentiate Between A Compiler And Interpreter

On the other hand, deep learning is a special type of machine learning and artificial intelligence that uses neural networks like humans. It uses data science, predictive modeling, and statistics. It is, therefore, an advanced version of machine learning.

These are some questions you should anticipate in your upcoming Computer Science interview. Remember to groom well for physical interviews and work on giving a good first impression. We wish you all the best.