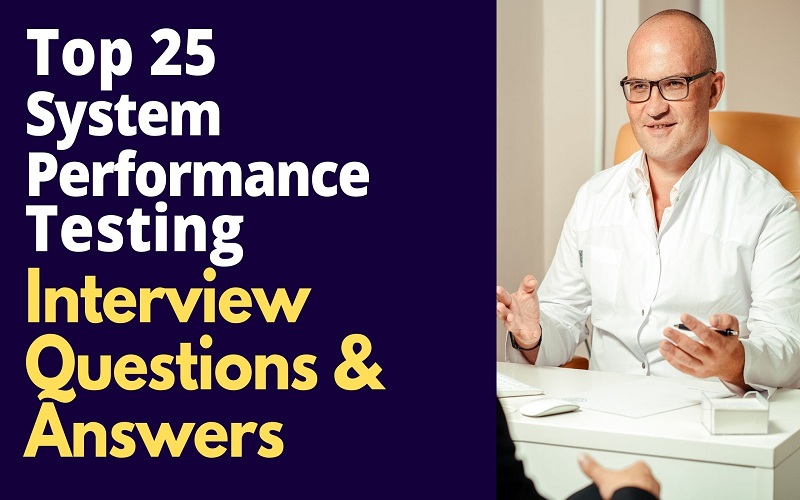 The following interview questions and answers will help you prepare adequately for your next interview.

Performance testing is the process of testing the quality attributes of an application to see how it will perform when assigned tasks. Testing software is introduced into the application for the main purpose of figuring out if that particular application can still sustain its normal stability, scalability, and speed.

2. What Factors Should Be Considered When Selecting Performance Tools?

When selecting performance tools you should keep in mind factors like the availability of a testing environment to make your work easier, the cost of the license, tools that are preferred by most customers, how efficient the tool is, testing tool options for users, and protocol support.

4. Define The Term “Throughput” As It Is Used In Performance Testing.

Throughput is data that is generated to respond to requests by clients using a particular application, these requests are usually sent to the server. The value of throughput contributes a great deal to the performance of an application.

5. What Are Some Of The Common Mistakes Done When Conducting Performance Testing?

Some of the mistakes that programmers do when testing the performance of an application include:

6. Explain The Difference Between Benchmark Testing And Baseline Testing.

7. Why Is Performance Testing Essential?

Performance testing of an application is mainly important for a couple of reasons:

8. Why Is Manual Load Testing No Longer Preferred By Programmers?

9. What Elements Should Be Considered When Conducting Performance Testing?

When conducting performance testing, elements that are being considered should be mostly related to why you are conducting the test and what you hope to get at the end of the testing. These elements include:

10. State All The Steps That Are Required For The Activity Of The Performance Test To Be Done?

11. Discuss Some Of The Common Performance Problems Experienced By Application Software Users?

Some of the performance problems experienced by application users include long loading time when accessing the application, poor response from the same application, coding errors, poor scalability, and hardware-related issues.

12. Define And State The Two Types Of Performance Tuning.

13. State The Different Components Of Loadrunner And Explain Their Benefits.

14. State The Difference Between Stress Testing And Soak Testing

Stress testing is a method of testing the performance of an application’s software by overloading it beyond the expected limit. The main reason for such a test is to see the capability of the application when it is under extreme pressure that is beyond the normal pressure. While soak testing is a method of testing the performance of application software for an extended period of time. The test is to figure out if the system can remain stable and still perform its tasks even after being used for a very long time. They both measure the strength of application software by adding pressures to see their stability.

16. What Software And Hardware Parameters Are Considered When Conducting A Performance Test?

Some of the parameters that are taken into consideration include the memory usage, the processor usage, the bandwidth, the memory page, the network output queue length, the response time, the CPU interruption per second, the committed memory, and the thread counts.

17. State The Differences Between Performance Testing And Functional Testing

18. Explain How You Can Identify And Rate Performance In Bottleneck Scenarios?

19. What Does The Term NeoLoad Mean?

NeoLoad is a testing tool used in measuring the performance of application software. The tool is also capable of proving possible programmatic solutions to the developers of the application before the programmers release the applications into production.

Creating a performance test plan in JMeter will require the developer to:

21. Why Do Programmers Prefer Jmeter In Performance Testing?

There are several reasons why Jmeter has gained popularity among software developers. Jmeter has enabled developers to determine the maximum number of concurrent users an application can handle at a time; the software also provides several graphic analysis reports on performance testing. Applications developers also prefer Jmeter since it is software that can be used to test both statistics resources like JavaScript and dynamic resources like Ajax.

22. State And Explain The Automatic Phases In Performance Testing.

Automatic performance testing also has its own step-to-step procedure towards estimated results. The steps include:

23. How Would You Perform Spike Testing In Jmeter?

The best way is to use a synchronizing timer where the highest number of threads are continuously jammed into the system, then they are released at the same time. The release of these different threads at the same time will cause the application to experience an immediate extreme overload. This is where the programmer will observe the performance of the application under such a scenario.

There are two possible causes of CPU utilization bottleneck. The first one may be caused due to the CPU preprocessor running at over 80% capacity. The second possible cause is insufficient system memory.

The most common reason that causes Memory utilization bottleneck is insufficient or fast enough RAM. Luck of enough memory causes the computer to start offloading storage via a very slow HDD or SSD to keep it running.

Software limitation bottleneck may be caused by programs that are only built to work with a single CPU. When they are linked to a stream of CPUs, they find it hard to handle a number of tasks at once.

25. What Are The Best Things To Consider When Selecting A Performance Testing Tool?

Study and practice these interview questions to ace your next interview. Be sure to arrive early and also dress decently for the interview.