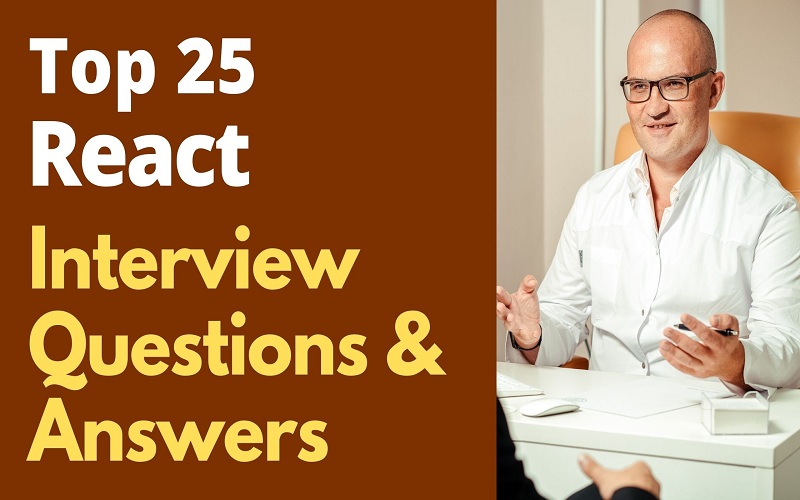 To start with, what is React? React is a JavaScript library used to create UIs (user interfaces) for web applications

Below are the top 25 questions and answers a React expert is likely to face at the interview. Also, there are sample answers that should guide you on how you are supposed to answer the interview questions.

“After learning that there was an opening for this role in your company, I did not hesitate to make my application since I had all it takes to work as react. I would like to use the skills and knowledge that I have gained in the university and past experience to better the performance of your company. In addition, as you can see that I am still young and energetic, I still have the room to sharpen my skills and knowledge in this field by learning from you as well. Lastly, I would like to use my skills to earn a living and support my family too.”

2. What Are The Roles Of A React Developer?

·         Integrate designs and wireframes within the application code

·         Monitor interaction of users and convert them into insightful information

·         Optimize components to work seamlessly across different browsers and devices

These are the duties and responsibilities that I would be delighted to perform in your company.”

3. What Are The Qualities That A React Need To Be Successful

4. What Are The Advantages Of Reactjs?

5. What Are The Lifecycle Methods Of React Components In Detail?

“Some of the important lifecycle methods of react components are;

6. What Are The Phases Of A React Component’s Lifecycle?

“The phases of react components are;

7. Which Are The Life Cycle Methods That Fall Into Updating Phase?

8. Differentiate Between Overloading And Overriding?

9. What Are The Differences Between Abstract Class And Interface?

10. What Are The Advantages Of Object-Oriented Programming?

11. What Are Some Disadvantages Of Object Oriented Programming?

“Some of the disadvantages of object-oriented programming include:

12. Distinguish Between Abstraction And Encapsulation

“Abstraction is the method of hiding the unwanted information whereas encapsulation is a method to hide the data in a single entity or unit along with a method to protect information from outside.’’

13. Give Us Some Features Of React

Some of the features of React are:

14. Mention Ten React Developer Tools That One Must Use.

“Example of tools that React developers use are;

15. What Are The Four Built-In Methods That A React Developer Would Use

16. What Are The Benefits Of Reactjs

17. What Are The Possible Disadvantages Associated With Reactjs

·         The high pace of development is not favorable  since the environment continually changes so fast, some of the developers do not feel comfortable relearning the new ways of doing things regularly

·         View part – ReactJS Covers only the UI Layers of the app and nothing else. So you still need to choose some other technologies to get a complete tooling set for development in the project.

·         JSX  as a barrier – some members of the development community consider JSX as a barrier, especially for new developers. Developers complain about its complexity in the learning curve.

18. What Are The Features Of Angular JS?

19. What Are The Features Of Reactjs?

“React Native is an open-source JavaScript framework used for developing a mobile application for iOS Android, and Windows. It uses only JavaScript to build a cross-platform mobile app.”

My previous employer had employed me on a contract that was renewable but I saw it good to change my working environment so that I can get different experiences in this field.

23. Where Do You See Yourself In The Next 5 Years

“First of all, in five years, I want to look at the work that I have done in this industry and feel that I have brought a change. My main focus is increasing sales for our clients by offering the best in the React development field. All these activities that are involved in businesses require the React department and I believe that I will work tirelessly to achieve more in this industry.”

24. What Kind Of Working Environment Would Be Best For You?

25. How Would People Around You Describe You?

Being a React developer is a very exciting career that one can have. Answer the questions directly to the point and you will secure the position. All the best.