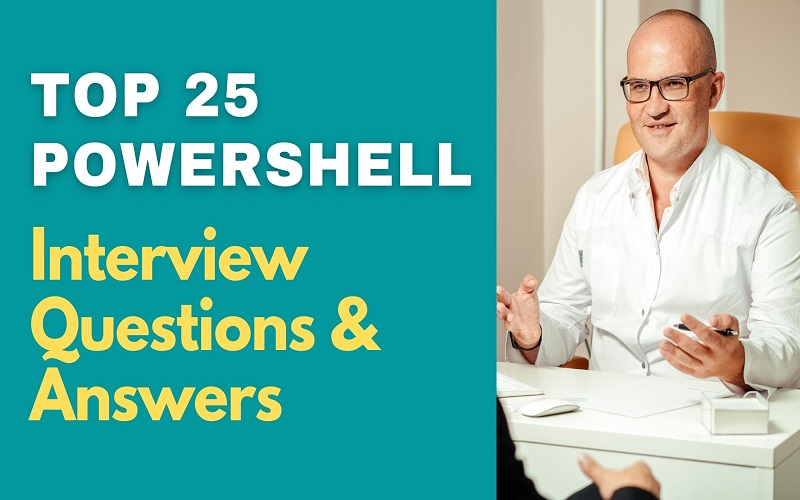 Do you have an upcoming DevOps Engineering Interview and don’t know where to start? Worry not,  because this article will focus on some common PowerShell Interview questions. Take a look at the following:

1. Can You Mention Some of the Features of PowerShell?

PowerShell has an array of features, explaining why it is unique. However, its primary feature is that it is based on an object rather than text. Furthermore, all its commands are customizable. Other features include PowerShell remoting which allows the execution of cmdlets on remote systems to help developers control remote computers from a single source, and scripting debugging, which examines commands, expressions and different functions.

3. Can You Please Explain What Try, Catch and Finally Are?

Try is the part of the script where PowerShell is intended to monitor errors. When an error occurs, it is stored by an automatic variable known as $Error. To handle the error, PowerShell usually searches the catch block. Catch is closely related to Try since it is the part that handles any error brought about by the Try block. Finally, on the other hand, comes last. It is the part that does away with resources that are no longer wanted by a script. All three are essential in PowerShell.

4. Do You Know the Difference Between PowerShell and CMD?

There are many differences between PowerShell and Command Prompt. Whereas command prompt is the default command-line interpreter for Windows, PowerShell is a task-based shell and scripting language. PowerShell can interpret both batch and PowerShell commands, whereas CMD only deals with batch commands. It (PowerShell) also generates a collection of objects while CMD only generates a stream of characters. Lastly, PowerShell acts both as a shell and scripting environment supporting the creation of large files. In contrast, the command prompt is a mere shell environment that allows users to perform easy and basic scripts.

5. There are Several Loops in PowerShell. Can You Mention Them?

There are four loops in PowerShell. The While loop, also known as the entry controlled loop, sequentially executes blocks in commands, whereas the For Loop executes commands or statements one after the other where a True Value exists. If not, the loop normally ends. The Do-While and Do-Until loop goes hand in hand. The Do-While, also known as the exit-controlled loop, executes commands at least once if the condition is true. The Do-Until loop executes block commands at least once if the condition is False. For each Loop, the last loop is used to access different numbers, strings, and objects.

6. What is PowerShell Cmdlets?

7. Do You Know the Difference Between Cmdlets and Commands?

Cmdlets differ from Commands in many ways. Unlike commands, they are not independent executables as they rely on .NET frameworks. They are also easy to create since one only needs a few dozen lines of code. They do not conduct independent parsing, output formatting and error presentation, instead performed by the Windows PowerShell runtime. Furthermore, they are record-oriented since they only process one object at a time.

This is my seventh year as a programmer and PowerShell expert. I believe that I have all it takes to excel in this job. I am also particularly wowed by this establishment since you have some of the best programmers around. Working here will see me collaborating with some of my idols on projects and therefore help me better my career. Lastly, I am looking for new challenges in my career. This workplace will present me with some and make me more conversant with this field. I am optimistic that I will perform exceedingly well if given a chance.

9. Can You Tell Us about Any Difference Between CMI and WMI

10. Tell Us about the Different Variables in PowerShell

There are three different variables in PowerShell. Automatic variables store the state of the Windows PowerShell. They usually have the information of the user and system, runtime variables, PowerShell settings and default variables. User creates variables that wholly rely on the user for creation and maintenance. They, therefore, only exist when the PowerShell window is open. They get terminated as soon as the windows close. Lastly, preference variables permit users to specify how PowerShell should behave in case of an error. It allows users to express a preference, which makes it pretty different from all the other variables.

11. Mention the Different Types of PowerShell Operators that You Know

There are six different PowerShell operators: assignment operator, redirection operators, split and joint operators, logical operators, comparison operators and arithmetic operator. The arithmetic operator is a mathematical function that performs different sequential calculations. On the other hand, a logical coordinator connects two or more operations. A good example is AND. Comparison operators compare values by combining several boolean expressions and coming up with one boolean output. A redirection operator is usually used as a command to redirect and input or output.

12. What Do You Understand by PowerShell Scripting?

13. Can You Mention the PowerShell Brackets and Explain Their Significance?

There are different types of brackets in PowerShell, which play significant roles. The most common ones are the braces brackets {}, which are usually used in blocked statements. They are usually referred to as curly. PowerShell also employs parenthesis brackets that generally come in handy in required arguments. The last type of brackets is the square brackets used to define optional items. It is worth noting that all these brackets have different meanings and significance when using PowerShell commands and should therefore be used rightfully.

14. Explain What Get-Command in PowerShell is

The Get-Command cmdlet is one of the most important PowerShell Cmdlets. It normally accesses all the commands installed on the computer, cutting across functions, filters, aliases, cmdlets, scripts and applications. It can get commands from different PowerShell modules and commands that were brought over from other sessions. It is, therefore, the most powerful command in PowerShell, thanks to its unlimited functions. Every PowerShell programmer appreciates just how helpful this command often is due to its versatility. This is one of the commands that beginners are advised to get used to as it determines almost everything else.

16. Do You Know the Uses of PowerShell Array?

The array in PowerShell is a data structure that stores a defined size of sequentially collected elements. It usually stores a given collection of data, even though, in many instances, it is viewed as a collection of variables or objects. PowerShell Array has several advantages, which explains why programmers find it useful. However, it may permit the running of scripts on remote computers. Users are generally required to create variables to develop a PowerShell Array, which must also be assigned. These arrays are usually expressed by the “@” symbol and are defined as a hashtable.

17. Explain What Automatic Variables are

Automatic variables usually store the state of the Windows PowerShell. These are variables containing all the information regarding the user and the system. They also hold default variables, PowerShell settings and runtime variables and can be created and maintained by Windows PowerShell. There are different types of automatic variables that serve different purposes. $ contains the last available token in the last line obtained by the session, whereas $? has the execution status of the last operation. $^ normally has the last line received by a given session.

18. What Do You Know about the Hash Table Function in PowerShell?

The hashtable function in PowerShell stores the key or value pairs in a hash table. A user is usually required to specify the object used as key and the value intended to be linked to it. For PowerShell, strings or numbers are usually used as keys. Users can therefore store data with a pair of associations. Both the key and value can exist in any length or information. It is also worth mentioning that it is mandatory to use @ in front of curly braces when declaring a hash table.

19. What Do You Know about Comparison Operators in PowerShell?

20. Do You Know What PowerShell Pipeline is? What is it Used For?

The PowerShell Pipeline acts as a connector of commands. It connects different commands, offering a way for one command to pass or relay its output to a different command hence the name pipeline. Thanks to it, the command at the receiving end normally has something to work with. It is also worth mentioning that the pipeline character in Windows PowerShell is a vertical bar, known as the Pipe: |. One can quickly get this character by pressing Shift+Backslash.

PowerShell uses three different ways to operate the ‘Select’ function. The first and primary one is a WMI Query language (WQL), which usually uses ‘_query’ to introduce ‘Select *from. Another familiar means that PowerShell users can use is Select-String. This is a cmdlet that checks whether there is s match in words, patterns or phrases. The last means is the Select-Object feature which only selects specified properties of objects or a set of objects. These also include a unique and special number of objects. One should use the Unique, Skip, Last and Index parameters for selection purposes.

22. Do You Know the Use of Array in PowerShell?

Yes. The array is usually used to run scripts against remote computers. However, one must first create it by coming up with an array and finally assigning it. It is worth noting that these are usually represented by the @ symbol, similar to hashtables, just that the curly braces do not exist. It is also accurate to say that the array is a data structure used to store a collection of items of the same or different types. It is, however, different from a variable.

23. Mention the Shortcomings of PowerShell

Despite the several advantages that this task automation solution possesses, it also comes with several disadvantages. First, it is object-based, unlike other shells where test-based commands are used when writing scripts. Therefore, someone who switches from Windows PowerShell to other shell types may take longer to get used to it. It also poses a security risk since PowerShell often leaves some loopholes susceptible to security breaches. Lastly, PowerShell must run a web server on the server during remote use, which consumes additional space, thus coming at a disadvantage.

24. What Makes You a Good Choice for this Company?

I am an experienced computer programmer and web application developer with vast knowledge in several programming languages and frameworks. I have worked in diverse settings and therefore experienced this field from different perspectives. I have all it takes to excel at this job and will do everything possible to contribute to value addition. I have also learnt that you greatly value PowerShell knowledge, and I am glad to inform you that it is one of my favourite areas. I am therefore looking forward to working with you on different projects.

25. What are Your Greatest Strengths?

I have several strengths that I believe qualify me for this position. I have vast coding and programming knowledge which has helped me build many applications and software in my career. I usually attribute this to the years I have spent in this field that have given me this needed experience. I am also highly organized and attentive to details, qualities required by any programmer or developer. Lastly, I am a hardworking professional who will go above and beyond to deliver and be helpful in the workplace.

link to Career Change: How to Discuss It with Your Employer

Are you unhappy in your current role? Maybe it isn’t what you expected, perhaps you’re feeling burnout, or possibly, you’re overdue for a career change. Either way, you’ll have to confront...

More often than not, you might find yourself with negative business cashflows where your expenditure exceeds your business income. This is a dangerous situation to find yourself in. If this is you,...